Doubts and Dangers of Disparate Systems in Distribution

The nature of the beast, when it comes to multi-channel distribution services, is an environment that has grown to be out of necessity. It all started with a shipping manifest system. The warehouse grew, and we needed to manage this new warehouse, so we brought in a WMS, which, by the way, had some great features we needed for building our kits. We needed to handle more calls, so the order management system was brought in for consumer direct orders, and then a contact management system for the B2B sales people’s orders. This was so successful for the business overall, but the accounting was becoming a nightmare, so the Accounting people put in some systems they knew already, for receivables and payables, payroll, and oh, a commission system for sales.

Then emails became a thing, so the growing IT Department acquired a customer service email system for that, and eventually found a vendor to do their email marketing. Finally, the Internet happened, so now we keep our inventory on a web store too. Half our customers and orders are coming from there, and going to different places.

When the websites took off, the Purchasing Department had its own PO system brought in, but then they grew and added some hosted forecasting software to use with the Marketing people, who also have a library of spreadsheets and apps for promotion analysis, key code tracking, web specials, and even a cross-sell/up-sell system.

What just happened? Now each of these systems has its own “experts” that the company relies heavily on, but anyone else (especially management) who does not use one particular system every day feels like they are in a foreign country if they need to access it instead of their own department’s system. Management across the board needs to have information from the other systems, so naturally they protect their own data that they have access to. This is their hostage, to use in the daily political negotiations to trade for the data they need from everyone else. Silos of data, built tall throughout the organization, can be a dangerous thing.

I.T. may step in to help with this problem by (guess what?) setting up another system, called a “data warehouse.” A system to sit on top of all the other systems, and pull data from them into one place. (Yes, unfortunately more data feeds, but for the greater good, right?) So eighteen systems now. Much to the dismay of the Accounting department, the numbers never seem to match across systems, but Marketing usually does not mind.

To make matters worse, the eighteen systems we listed above all have monthly or annual maintenance costs, occasional required upgrades just to keep them working properly on the latest version of Windows or with each other, and these crazy “feeds of data” going back and forth all over the place. The I.T. Department is always trying to keep these feeds going successfully, some as if they were donkeys going up a steep mountain trail. Worse yet is when data needs to be entered or regularly corrected in two or more places manually, such as the WMS and the Website.

Is there a better way? What if we combined some of these systems into one “enterprise wide” system (and maybe two or three add-ons)? In most cases, the argument made by the individual departments, for this type of environment, (cherishingly referred to as “best of breed”) is that each system has some compelling feature that we cannot live without (like the WMS’s kitting feature). Features we would lose if we paired down to a single system across several departments. This is rarely true. In most cases, the combined system either already has the feature (if you dig deep enough) or the feature can be added to an enterprise system. But ask yourself, if this compelling feature was reviewed by upper management, could it be deemed a “sacred cow”, which no longer “aligns with the overall goals of our organization?”

Another argument that could be made against having a single system is that we would be putting too many eggs into one basket. If the single system goes down, would the entire organization be stuck? Anyone familiar with the Theory of Constraints understands that any of these systems could be causing a bottleneck. As it turns out, keeping eighteen systems up and running is eighteen times harder than keeping one system up and running. It also turns out that enterprise level systems are built to be more disaster-proof because they know from the ground up how much more they are relied on.

A true enterprise distribution system breaks down the silos of hostage data, requires less overall maintenance costs and resources, and most importantly, it gives management direct access to a clearer, more accurate picture of what is happening at any point in time across all departments, vital for best informed management decision making. 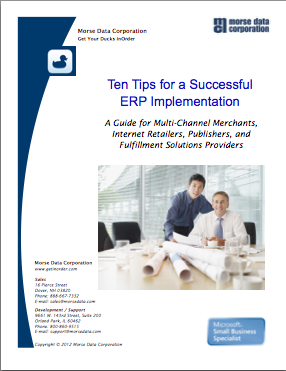